How To Command An Audience Like A Military Instructor If you’re standing in front of an audience to impart lessons on a subject, you’re expected to be authoritative or at least competent about your subject matter. They aren’t there to listen to something they’ve already heard umpteen times before, but a unique perspective on your topic of discussion.

Likened to a teacher who is unsure about a subject that he or she is teaching, you’ll very quickly lose the audience’s respect and ultimately their attention.

On the flip side, there are teachers that walk into the room and immediately commands your attention, almost effortlessly earning the respect of those listening. It’s slightly different from ‘knowing’ your stuff, but more so exuding an aura of authority. How can you be authoritative then?

Three of the simplest ways be more authoritative are:

You need to be able to hold strong, regular eye contact with your crowd. There are no two ways about it. In my experience as a military instructor, I regularly have more than a hundred grown men looking up to me, waiting for instructions. Looking down to the floor with shifty eyes and uncertainty is one of the fastest ways to lose their attention and respect.

Secondly, is your body language.

When humans get scared, we close up our postures similar to how animals go into a submissive position or posture. It’s so rampant (especially in public figures), that we’ve given it a name: the ‘Fig-Leaf Presenting Position‘. Presenters that are nervous or afraid tend to default into this defensive stance to protect their more sensitive parts of the body.

Ever heard of ‘Fake it, till you make it’? To appear more confident via more effective body language, try to consciously maintain a good, comfortable posture. Walk with large purposeful strides, with your feet, shoulder-width apart.

Lastly, it’s your vocal tonality. I’ve seen huge, bulky military men crumble into nervous wrecks when put infront of an audience in a public-speaking situation. They tend to talk much faster to get through the experience much quicker. This comes at the expense of the audience and their presence.

Instead, to truly command attention, you’ll do well to talk more slowly.

One of the best ways to get good these three areas are to study the speeches of powerful politicians and businessman. Take Lee Kuan Yew’s Speech for example:

2) Demonstrate Instead of Simply Telling

One of my favorite demonstrations as an instructor was when we needed to teach the basics of self-defense. The approach was to find the heaviest soldier from the crowd as a volunteer and execute a simple, but effective technique that would sweep him off his feet, resulting in the soldier falling on his back.

As I have a smaller frame (at 1.67M and 65KG) than many of the recruits, the demonstration held even more power. Demonstrating that a much smaller soldier could easily takedown someone two times larger left a deep impression in many of my recruits – not to mention it also helped to cement a positive impression of my capabilities in their minds for the months to follow.

Thirdly, passion goes a long way to command an audience.

In every class I instruct, there will often be a small minority who isn’t a 100% interested in the class material. They’d much prefer to slack off, not pay attention or cause some disruption to classes with their unruliness. However, over time, I observed that tweaking certain aspects of my delivery became useful in winning over these non-enthusiasts. 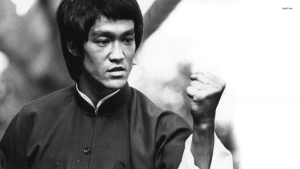 You know someone is passionate about that particular expertise when he’s able to pick out the tiny details that 99% of people miss. Identify certain nuances in your field that the majority hardly talks about. Include them in your presentation and delivery to watch your audiences appreciate the effort.

For example, in the arena of public speaking, effective speakers typically pay attention to vocal tonality, the speed of delivery, pauses, vocal inflections when on stage. These are details that most people miss, but differentiate the good speakers from the great ones.

The psychologist Mihaly Csikszentmihalyi introduced a concept named ‘flow’. When you’re doing something you’re passionate about, you find yourself losing track of time and your surroundings. That is an example of having found ‘flow’.

Ever observed a street performer so immersed in his performance that you can’t help but steal a closer look? That’s a great example of commanding an audience through flow. The key is to be present at the moment without having your mind wander off and getting distracted by other thoughts.

Mindfulness training and actively focusing on that specific moment you’re delivering your speech can do wonders for your delivery.

4) Work with your Audience

If you’re working with an audience, you need to garner their trust, respect, and likeability, fast. As an instructor, it’s a tough line to toe. Overly nice treatment gets you perceived as a pushover and being too strict can sow discord. The most effective takeaway I got from these occasions is that the audience needs to perceive you as being ‘one of them’. As Cialdini stated in his book, Influence, people tend to like people that are like them.

If my men perceive me to be a dictator figure hell-bent on my own agendas, nobody is going to listen to me, much less follow my instructions. Introducing parts of your personality or background that aligns with that of audience members is a quick way to build instant rapport and familiarity.

Through the years as an instructor, I found that if you speaking to your audience’s hopes, dreams, and fears, you can get them to listen to you more attentively. You can garner their trust, respect and become more likable.

For example, most people aren’t interested in ‘financial literacy’. However, a lot of them are worried about housing loans, car loans or salary increases. Use layman language and avoid speaking at a high-level to connect with your audience members on a personal level.

5) Hold to your Highest Purpose

Lastly, you cannot command an audience when speaking in front of them if you do not hold to your highest purpose. Have you ever wondered how Gandhi, Martin Luther King gave speeches that changed the world? Yes. That’s because they are holding to their highest purpose. They are delivering those speeches from a point that’s deeply rooted in their purpose. For the greater good.

You may not be Winston Churchill beckoning troops to fight on the beaches, however, you can also hold to your highest purpose when speaking to a crowd.

Contribute to Something Meaningful

The highest purpose of my role as a SAF self-defense instructor was to impart self-defense instruction in an effective manner to Singapore military troops to enable them to defend themselves in an unarmed combat situation. In my heart and in my bones, I was aligned with that purpose and the reason that we’re conducting the presentation in the first place.

The session did not feel forced. Being able to defend yourself in dangerous situations as a soldier can mean the difference between life and death. I was glad to avail time to spend with these young men hailing from different families and backgrounds to enable them to serve their nation.  Likewise, your speech should be something that you believe in.

If you communicate to your audience in a ‘just had to be done’ manner, the devil-may-care attitude towards the topic might backfire. Audiences can feel the lack of sincerity and tune out immediately.

However, gearing your energy and presentation towards your noble agenda or purpose can help you become more charismatic and persuasive.

Through the years as a self-defense instructor for the Singapore military, I found that being authoritative, demonstrating instead of simply telling, being passionate about your subject, working with your audience and holding to your highest purposes are 5 timeless principles to command an audience.

Co-founder and Head of training at HighSpark, Kai Xin's super power is to empower high-performing individuals win more hearts and minds through persuasive communications. She was recently one of the only 20 Singaporeans to be honoured on the Forbes30Under30 Asia list. Beyond business, Kai Xin makes time for meditation, is determined to lead her life mindfully, and aspire to unveil the magic of the mind.
← Prev: The Ultimate Guide To Developing Initial Coin Offering Presentations Next: 5 Tips to Perfecting Your Elevator Pitch → How to Compress PowerPoint Presentations in 2020 : The Complete Guide For Mac and Windows

Imagine this - it’s late at night and you’re finishing up your last few slides for your big presentation tomorrow. You’ve done your final check and... Think back on all the presentations you have ever sat through. Which presentation comes to mind immediately, and why was it so particularly...