How to End Your Presentation With Style “I’ve come to the end of my presentation. Any questions?” you ask, hoping to hear a response from your audience. Unfortunately, you get nothing but an awkward silence.You think you pulled off a pretty great presentation, but then find yourself falling flat at the end. In this article, we endeavor to de-mystify how to end a presentation with style.

Let’s face the truth. Unless you present like Steve Jobs, the likelihood of an audience remembering your public speaking performance from start to end is extremely low. But this doesn’t mean that it is impossible to make a lasting impression. Studies have shown that when an audience is given a series of information, they have a tendency to remember the first and last items best. So use this to your advantage, and make an impact with your closing statement. Not only will you create a memorable moment, but your audience will also have an easier time retaining the message you’re trying to bring across.

We’ll show you 5 proven ways on how to end your presentation.

1. Inspire Your Audience with a Quote

Quotes are one of the most commonly used methods and with good reason. It has been a tried-and-tested way to reach out to your audience and connect with them on a deeper level. But here’s the thing: You need to figure out what resonates with them, and choose one that fits the presentation theme. If you’re up to it, you can round off the quote with your own thoughts as well.

For a great example, take a look at Sir Ken Robinson’s TED Talk, ‘How to escape education’s death valley’. When he was concluding his presentation, he used Benjamin Franklin’s quote:

However, instead of ending it there, he then continued, “And if we can encourage more people, that will be a movement. And if the movement is strong enough, that’s, in the best sense of the word, a revolution. And that’s what we need.”

Not only did he use the quote to inspire the audience, he also added his own thoughts to provide perspective and illustrate his point further.

The quotes you share do not have to be from well-known authors. In fact, unusual quotes that have been rarely used can work in your favor by providing a different perspective. Just remember, it pays to exercise caution, as an inappropriate quote in the wrong situation may backfire instead.

2. End with a Compelling Image

We all know the saying, ‘a picture is worth a thousand words’. It’s pretty cliché, but true – Images do help to bring your message across in an impactful way. Ever heard of the ‘The Burning Monk’? In 1963, photographer Malcolm Browne captured a stunning photo of a monk who self-immolated in protest against the persecution of Buddhists. That award-winning photo sparked outrage around the world, and brought the situation into focus for many who were previously unaware of the situation. If the news had been reported without this image, would it have the same impact? Unlikely. Of course, information can’t be shared without text, but ultimately, images are the ones that leave the biggest impression.

When you’re selecting an image to put on your final slide, ask yourself these questions to guide you along.

3. Leave With a Question

While it is not often encouraged to leave your audience hanging, suspense can be a fantastic way to create a memorable ending if you use it appropriately. Round off with a question that they can reflect on after the presentation, to keep them thinking about what you’ve shared. Keep it closely related to your topic, and use it to put the spotlight on a point you which to bring across.

Take a look at Scott Dinsmore’s TEDx talk, ‘How to find and do work you love’. In his presentation, he talked about discovering what matters to us, and then start doing it. For his conclusion, he ended by asking the audience, “What is the work you can’t not do?”

This ending can also useful if you know that you will be following up with a second presentation that will answer the question. Pose a thought-provoking question, then hint that you will be answering it in your next presentation, to give them something to look forward to.

Sometimes, it’s great to be straightforward, and tell the audience what you’d like them to do. Would you like them to try doing something? Buy a product you’re selling? Commit to an event?

When you’re inviting the audience to act on something, be sure to make a clear statement. Ensure that your words are not vague or misleading, and bring your point across in a confident and firm manner.

Don’t make it tough for your audience to do an action. Who likes to leap through dozens of obstacles to get things done? Get your audience moving by starting slow. For example, if you’re presenting about environmental protection, don’t ask them to cut out all wastage immediately, that’s an impossible task. Instead, ask them to start by recycling whenever they can.

Alternatively, if you’re daring enough, make a bold statement. Share your belief in something, and involve the audience in it.

Not sure how you can do it? Watch Kakenya Ntaiya’s talk, ‘A girl who demanded school’. In her concluding statement, she passionately declared:

You’ve spent a lot of time preparing the message you’re sharing, and now it’s time to reinforce it. To do that, summarize the key points of your presentation, and repeat them so that your audience remembers it once more.

A great technique to use when you’re repeating your message is the Rule of Three, a rule that suggests that people generally tend to remember concepts or ideas presented in threes better. Some commonly used examples would be ‘Reduce, Reuse, Recycle’ and ‘Mind, Body and Spirit’. Think of your presentation, and distil your key message into three words, phrases or sentences, before structuring your conclusion.

Neil Pasricha’s TEDx talk, ‘The 3 A’s of awesome’, is a fantastic example to learn from. In it, he talks about 3 secrets to lead an awesome life, i.e., Attitude, Awareness and Authenticity, which form the message for his entire presentation. But to further strengthen his message, he then repeats it at his conclusion by saying:

“And that’s why I believe that if you live your life with a great attitude, choosing to move forward and move on whenever life deals you a blow, living with a sense of awareness of the world around you, embracing your inner three year-old and seeing the tiny joys that make life so sweet and being authentic to yourself, being you and being cool with that, letting your heart lead you and putting yourself in experiences that satisfy you, then I think you’ll live a life that is rich and is satisfying, and I think you’ll live a life that is truly awesome.”

Sounds great, isn’t it? Not only did he reinforce his points, but he also captured his audience’s attention with a positive statement.

As presenters, we always hope that our presentations will end off on a high note. So now that you know how to end a presentation with style, take some time to prepare and practice, and you’re good to go. All the best!

Co-founder and Head of training at HighSpark, Kai Xin's super power is to empower high-performing individuals win more hearts and minds through persuasive communications. She was recently one of the only 20 Singaporeans to be honoured on the Forbes30Under30 Asia list. Beyond business, Kai Xin makes time for meditation, is determined to lead her life mindfully, and aspire to unveil the magic of the mind.
← Prev: 9 Commandments to Become a Great Public Speaker Next: Closing the Gaps: 3 Ways to Ace Your Business Presentation → Patrice Choong: Stepping Out of Your Comfort Zone

Read on as Patrice shares on how stories can be used to inspire you to step out of your comfort zone. 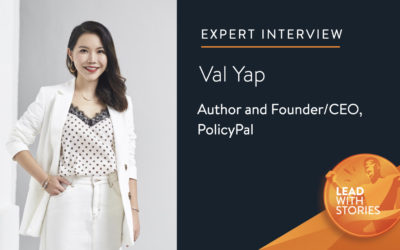